The following is a sampling of questions I’ve received from students, public-lecture attendees, and tour participants. I do not reveal the identity or exact location of the individuals asking, but I heartily thank them for their participation. In most cases I have reworked the questions a bit for the sake of clarity or to make them of greater general interest.

Q: If you dig beneath my house in northeastern Illinois, you eventually run into something called “St. Peter Sandstone.” Where did the sand that makes up that rock originally come from?

RAY’S A: The sand that formed this sedimentary unit was deposited in the Ordovician Period, about half a billion years ago,  in shallow coastline water when this area was covered by a saltwater sea. The sand had been eroded from what was probably low, rolling, rocky terrain north or northeast of here.  It was then transported to the coast by southward-flowing streams. Incidentally, at that point our part of North America was situated in the subtropics, south of the Equator—and the continent was actually rotated about 45 degrees clockwise from its current orientation. You can see the St. Peter Sandstone outcropping at the surface in various scenic locales in northern Illinois—most notably at Starved Rock and Castle Rock State Parks.

This shows the “St. Pete” exposed below the high overlook at Castle Rock.  Photo © 2018 by Raymond Wiggers.

Q: I notice that in your climate-change talks you do not discuss the fact there is a U. S.-government-directed program to spray chemical trails (“chemtrails”) in the atmosphere to affect the Earth’s climate. Why?

RAY’S A: Because my talks are science- and evidence-based, and do not pander to conspiracy theorists. And I confess I’m growing a little weary of explaining that contrails (produced by water vapor from jet-engine exhaust condensing in a layer of air currently below the dewpoint) are not indicative of a diabolical government geoengineering plot. At this point I’m not even sure our current leaders could geoengineer themselves out of a wet paper bag. I’d worry more about what the corporations and the mainstream media have done to this country. 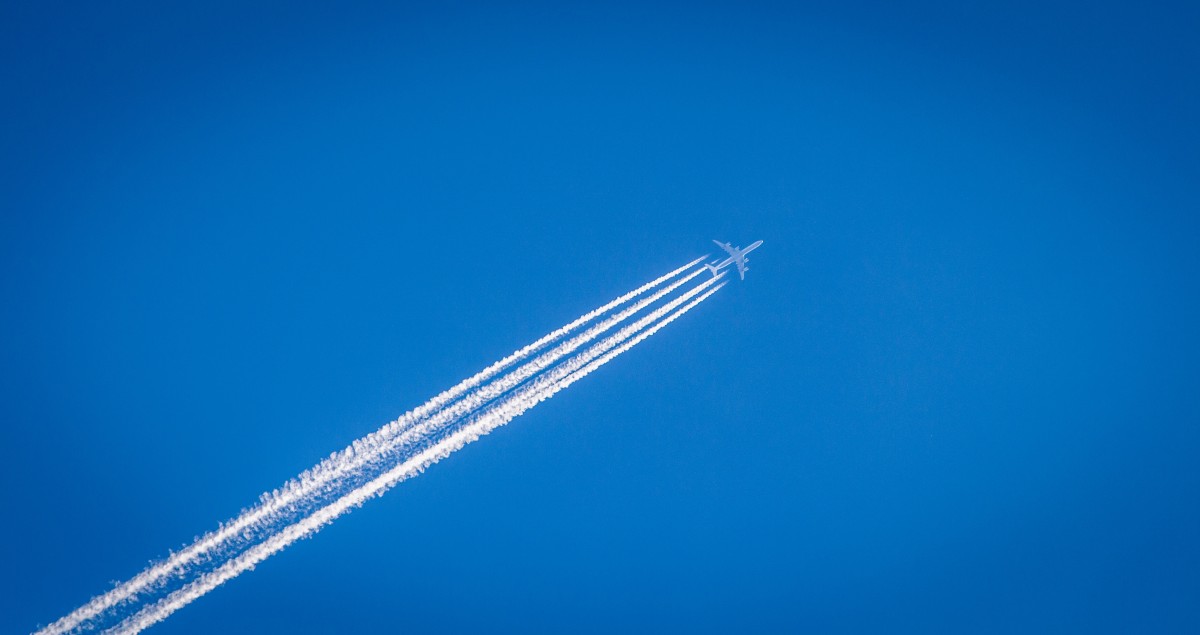 A commercial jetliner’s contrails, produced by the forces of nature, and not by the forces of the Deep State. But some folks, insufficiently acquainted with the nonhuman aspects of the world,  just have to involve humanity in everything.

Q: In your researches, have you ever come across an instance where Alpine residents, for example, tried to stop a glacier from destroying their village? The answer to this question might provide insight into our civilization’s future when the Ice Age returns.

RAY’S A: It’s an interesting question, especially if one considers what alpine communities might have encountered in earlier centuries, but I haven’t  come across anything so far. I would say, however, that of all the things we should be concerned with in the twenty-first century, the return of ice-age glaciation conditions is rock-bottom on the list. Climatically speaking, we’re headed—with a vengeance—in the opposite direction. I realize there is a toxic blend of crackpot conspiracy theories and denialist disinformation-campaign material about an impending ice age floating about in our delusion-inducing media, but a careful review of such reputable scientific sources as the Intergovernmental Panel on Climate Change (IPCC) and the National Climate Assessment (NCA)  will do much to dispel that. There’s also a plentitude of great, science-based public information online, including my favorites, RealClimate and the Weather Underground’s Category 6 blog.

Q: Ray, you sure do talk funny. Are you one of them aliens I heard about on YouTube?

RAY’S A: Yes, but I don’t appreciate your blowing my cover. I was born on the fourth planet of the Epsilon Eridani star system and was originally known as Zotar-12X. I was sent to Earth on a fact-finding mission at a very early age. When I arrived it did not take me long to discover that the most (and possibly only) sentient lifeforms on this planet are the trees. I enjoy talking with them very much. Despite my exotic origin I have nothing whatsoever to do with chemtrails.